On the work of Mariana Vassileva

No one in philosophy so eloquently invoked the duality of human nature of feeling and
thinking like Blaise Pascal. The often dramatic tension between reason and feeling produces,
in his understanding, ”a civil war within oneself.” To escape this conflict, humans usually
choose either one side or the other without this leading to a solution. It is necessary however
to pacify and balance reason and feeling. What Pascal writes in his ”Pensées” on the
ambivalent human nature, Mariana Vassileva shows through powerful images in her art.
Pascal’s philosophy is not only apparent when one looks at the artist’s works, but also when
one has the privilege of getting to know the artist herself. Vassileva, born in Bulgaria, lives and
works in Berlin. She is an equally intelligent and sensitive woman, who draws her multimedia
works from both mind and emotion. To her, precise analysis and compassionate empathy are
not opposites. On the contrary, they formally condition one another in the artist’s view of the
human being.

This is evident from the title of the catalogue in which she collects her objects, sculptures,
drawings, installations, photographs and videos: ”Fragile Power”. Being fragile and vulnerable
are not necessarily the connotations we commonly associate with power. If however, one
thinks of human beings as power-holders, and this concerns Vassileva’s entire interest, then
we become aware of the instability of all man-made conditions. The ancient Greeks saw
danger in glory, in a bright moment already the grey transience and their tragedies warned the
spectators against any hubris.

In the following an attempt is made to look more closely at some of Mariana Vassileva’s works
against this background. Their selection is entirely according to the author’s preference,
and their discussion follows a more medial and thematic than a chronological order. What is
striking about the artist’s work at first glance is the returning of light as both a subject and
medium. A major theme! From Genesis to Enlightenment, not to mention the nineteenth8
century electrification, light is associated with a treasury of cultural metaphors. Vassileva
takes this to another level in her works. In doing so, she finds shapes that let us see light in
completely new contexts.

Particularly impressive is the archaic ritual performed by a young man in the video ”Turnono”
(2013). Like Prometheus once, who stole the fire from the gods, he illuminates the darkness
of the night by sweeping a mighty ball of fire. He turns in a raging whirl around his own
axis. Light and dark, fire and night become twin accomplices who, like good and evil, are
tensely related to each other. The same happens in the installation ”Break In / Out: Breathing
Light” (2013). A lonely lightbulb is locked up in a dark prison of wire mesh, from which its
rays of light escape. The light becomes the index of the thinking human and the rays of light
symbolically become his thoughts. They are, as Friedrich Schiller has emphatically written,
”free” and cannot be imprisoned.

Vassileva’s other works with light concretely address a specific situation. For example, her
touching installation, which shows an armada of shoes that seek their way across the broad,
white surface of a wall, reminds us of the human migration flows of our time. By furnishing
each of these shoes with a light that evokes the aura of Christian iconography, the artist
gives back dignity to the people becoming visible through this installation. A dignity often
denied by the reality of political practice. Moving poetry is also found in the choreography of
her video ”Reflections” (2006), in which people in a park reflect the light of the sun through
small mirrors in the direction of the camera, in this way providing an Arcadian group image
illuminated by starry flashes.

Especially in that last, but also in the works mentioned earlier, the production strategy is
quite simple. Yet a simplicity that’s difficult to enact. Because Vassileva always uses it to
develop a complex semantic echo chamber of thinking and feeling.

Like in the wonderful ”Highway Dream” (2014), the black and white photograph of a car tire
rolling down alone a dusty country road. Here the artist succeeds in creating a melancholic
road movie with just one image. It tells of pride and dignity, freedom and independence,
but also of loneliness and vulnerability. Full of militant vigour is also the protagonist of the
video ”Toro” (2008), who uses his jacket as a capa to fight like a bullfighter against the
overpowering sea.

This marks an experience of powerlessness and finiteness as well as a slapstick attitude.
They collaborate as if the perspective of Caspar David Friedrich’s ”Monk by the Sea” had
formed an alliance with the defiant punk motto, ”You have no opportunity, but use it”. The
compatibility of the incompatible is captured in many of Vassileva’s works. Her microphone
ending in a grenade knows that words can not only love and pacify, but can also be weapons
that cause harm and in the worst case kill. Humans are of the same ambivalence as their
language. The beautiful Joey (2007) is no less male than female. The hand in ”Just a Game”
(2009) transforms into both a weapon and a blessing gesture. And the charted head,
”Phrenology Head” (2014), with the red clown’s nose testifies how smart and stupid we can
be at the same time.

In fact, all of Vassileva’s works are about us. The dictum of Aristotle in his ”Poetics” that art
should be concerned with the human cause, what the ancient Romans called the ”mea reas
agitur”, is masterfully observed by the artist. In her work we often see artistic, seemingly
gravity-relieved tricks like the tower of school chairs in “Denkpause” (2016). Even its title
opens up a perspective through which Shakespeare’s ”Hamlet” also tries make his friend
aware of the reality of ”miracles and consecrations” (Gottfried Benn) beyond rational
argument: ”There are more things in heaven and on earth than your book learning could ever
imagine, Horatio.”

A similar artistry is also featured in Vassileva’s wonderful work “Flying and Other Daily
Necessities” (2016), in which a human becomes an aviator. A rope that stretches out to the
skies like a snake summoned by an Indian dressage master, takes him into the air. It is as if
they are bound by a powerful, ever faster unwinding umbilical cord. It also emphasises that
our longing to fly is in our DNA. Accompanied here by the illuminating paradox, that in order
to find oneself and become a unique individual, and thus to fly through our lives, we have
to cast off this umbilical cord. The fact that the desire to fly, to rise above gravity and the
monotony of our existence is recognised by the artist as a ”daily necessity” has a fairytale-like
as well as a moral dimension. Once again it is depicted what Oscar Wilde captivated in the
beautiful aphorism: ”Only the realist knows how to dream.”

Immanuel Kant has written about humans that they are made of such “wry wood” that it
“cannot be straightened”. This sentence occurred to me when looking at Mariana Vassileva’s
installation, consisting of an old, crooked, rusty and a new, straight, golden nail. It is
accompanied by the question ”Will They Be Friends One Day?” (2011). 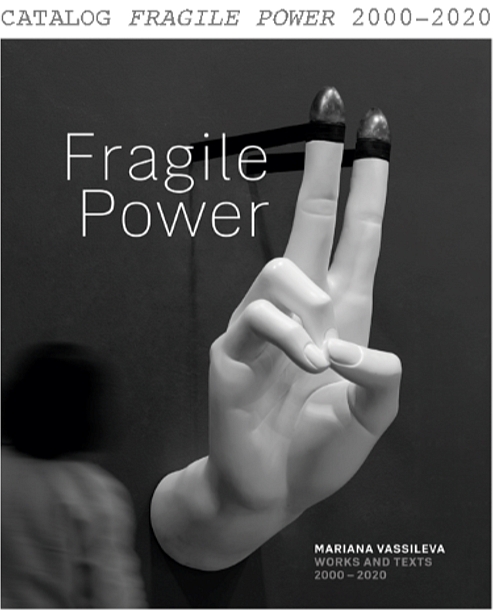 1994-2000 studied at the Universität der Künste in Berlin,
lives and work in Berlin